Why? That is the first question I get from most people asking me why would I restore a 1990 Plymouth plain wrapper Acclaim. Two reasons; turns out this car is somewhat of a pseudo unicorn, and second is for the cheap thrill of horsepower pulling Gs. This Acclaim was built with a factory 5 speed trans along with a 2.5L Turbo. The icing on the cake is a factory sunroof. These options estimate that this is 1 of 112 cars built. The car came from the southwestern US prior to coming to MN. I can say that restoring this car and not fixing any rust was a real treat. Example- the banjo exhaust bolts actually came off without breaking, in fact the same original bolts were reused when bolting on the new exhaust system. The bill at the bodyshop was considerably less than usual given there was no rust to repair.

Turbo Dodge; The Turbo Dodge following is strong.  Enthusiasts mostly congregate under the SDAC, Shelby Dodge Auto Club., and have a large internet presence. What draws me to this facet of the car hobby is the challenge of achieving horsepower as frugally as possible. Turbo tech is nothing new but still proves to be the best bang for the buck for creating the ever addicting horsepower pulling Gs. The Turbo Dodge crowd once again proved generous with knowledge and parts for this build. To all of them I am thankful.

10 years ago I dipped my toe into the Turbo Dodge community and built a black Shelby Rampage pictured below. The engine was converted from a 2.2L Turbo 1 to a Turbo 2 (added the intercooler etc). After headwork, bigger turbo, injectors and exhaust the boost gauge read 16 PSI. The lighter duty drive train of the L-bodies was most certainly put to the test.

With most builds I seek to learn something new and will often connect with a local guru. This Acclaim  build was no different. Once I located the Acclaim I tapped the help of the same local Turbo Dodge guru who helped with the Shelby Rampage above.  My friend Todd, affectionately named, “Turbo Todd”. Todd knows tricks, lots of tricks.  We’ll come back to Todd in a bit.

Again, the resulting Gs via turbo boost is real and very addicting.  Using only Mother Mopar used parts from different models is the trick, and information is widely shared, but parts are getting very hard to find as most TD cars from the 80’s are being sent to the bone yards and crushed.   A perfect example of Mother Mopar Mods is what was done here with this Acclaim. While the factory produced this car with a turbo producing 7-8 PSI of boost, post Mother Mopar mods the car now produces 26PSI of neck snapping boost. Will run it at 15-16PSI Max via adjustment. This is just sheer thrill while still getting over 30MPG when used as a daily driver. Turbo gurus know that replacing the one piece intake with a Mopar two piece intake,  using an intercooler from a ’90 VNT Daytona, (that directly bolts in to this Acclaim with no cutting needed), swapping the air box from another model is step one. Intercooler hoses need not be cut, they just connect as if sent from the factory. Next is bolting on a Mopar-used bigger turbo with a 2.5″ swapped swing valve, a ported head, intake and exhaust manifolds, bigger Mopar injectors, improved oil & coolant lines, and finally special injector wiring etc. The thrill starts to become real. As mentioned above this car also received new 2.5″ exhaust with no Cat. There are about 13 other tips and tricks done to the top end and little in-line diodes to fool the OBC, more of the Turbo Todd tricks. The goal is no warming up the credit card at Jeggs or Summit. Ick!

I will take a moment to highlight the head porting mentioned above. This is a big item I learned from Todd this time around and turns out porting is his specialty. I learned early in life that a healthy motor that breathes will run most efficiently and produce the most power for its DNA. Finding a good head for this project proved to be more challenging than originally thought. The stock “swirl” head was cracked and a second head was also bad. Finally a good candidate was located. Todd spent hours porting not only the head, but also the intake and exhaust manifold. Thorough blasting, cleaning and flushing heads before being put back into service is paramount.

While the interior was baked and shot, a replacement interior from a local salvage yard, including cleanable carpet could be had for $65 bucks. I located a couple of parts cars for $100 that once again proved to be invaluable. The sunroof gasket which was baked to a hard, brittle crisp proved to be difficult to find. After researching I learned that a ’01 Cad Eldo sunroof uses the same gasket profile. A trip an hour west to a junk yard I found one that was usable. Beats watching the NFL any day. The headliner on this one was a challenge and gluing in new fabric was required. Still needed a new cardboard headliner because the original was so dry from the heat of the SW it simply crumbled when touched. Parts cars to the rescue.

Below are pics of the car in before condition, being stripped to bare metal for a re-spray and a money shot of the  head, intake and turbo. 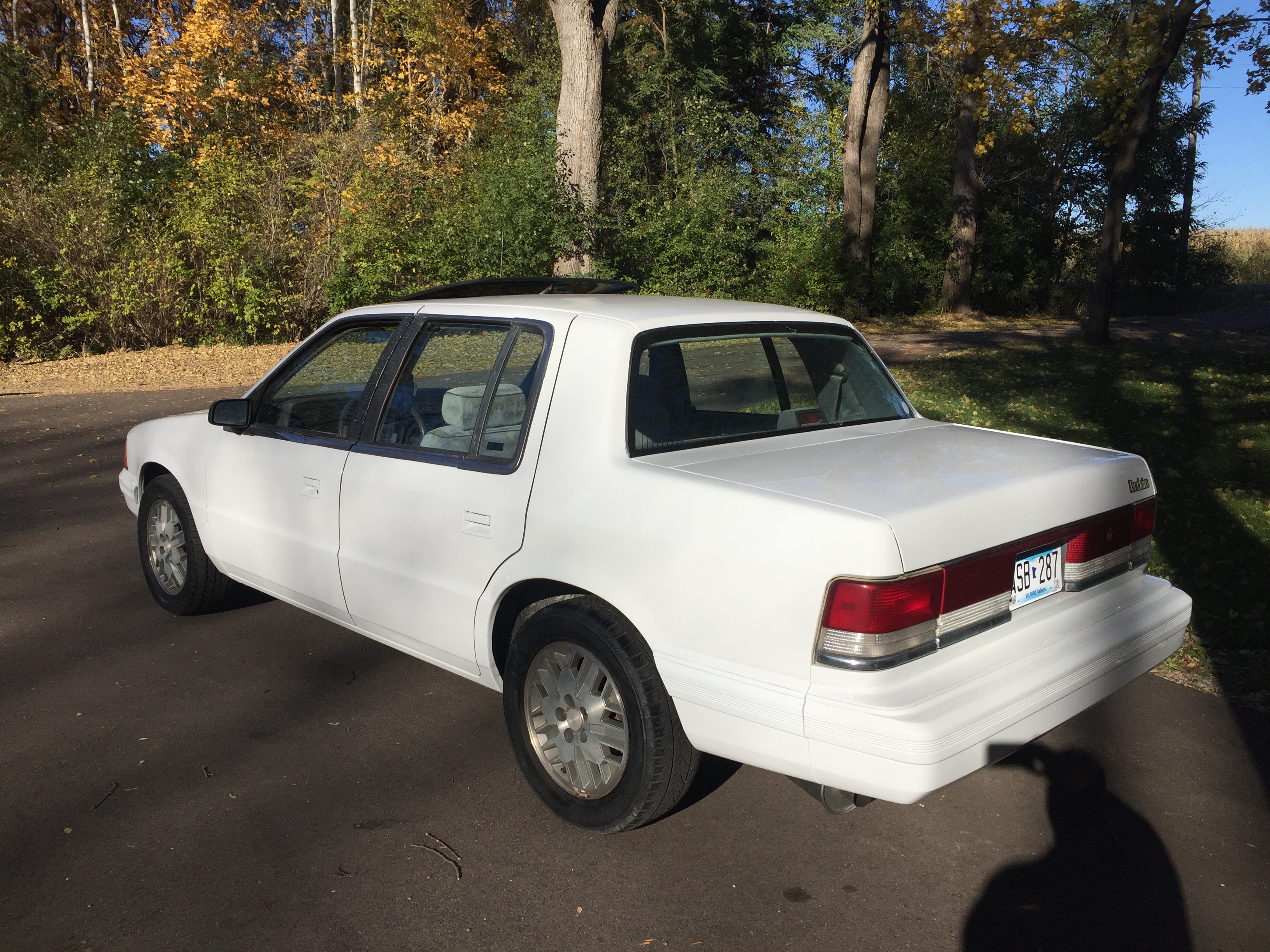 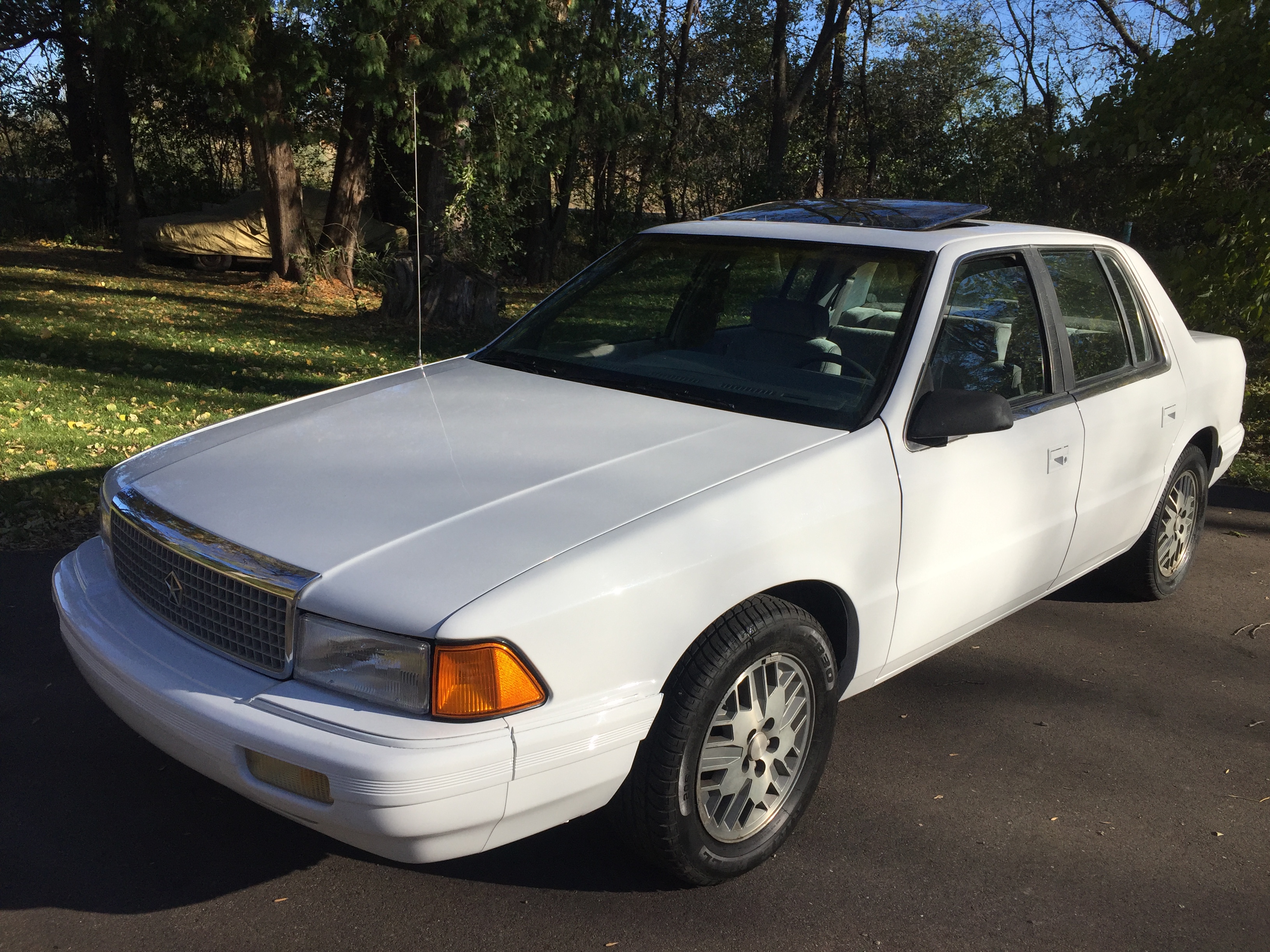 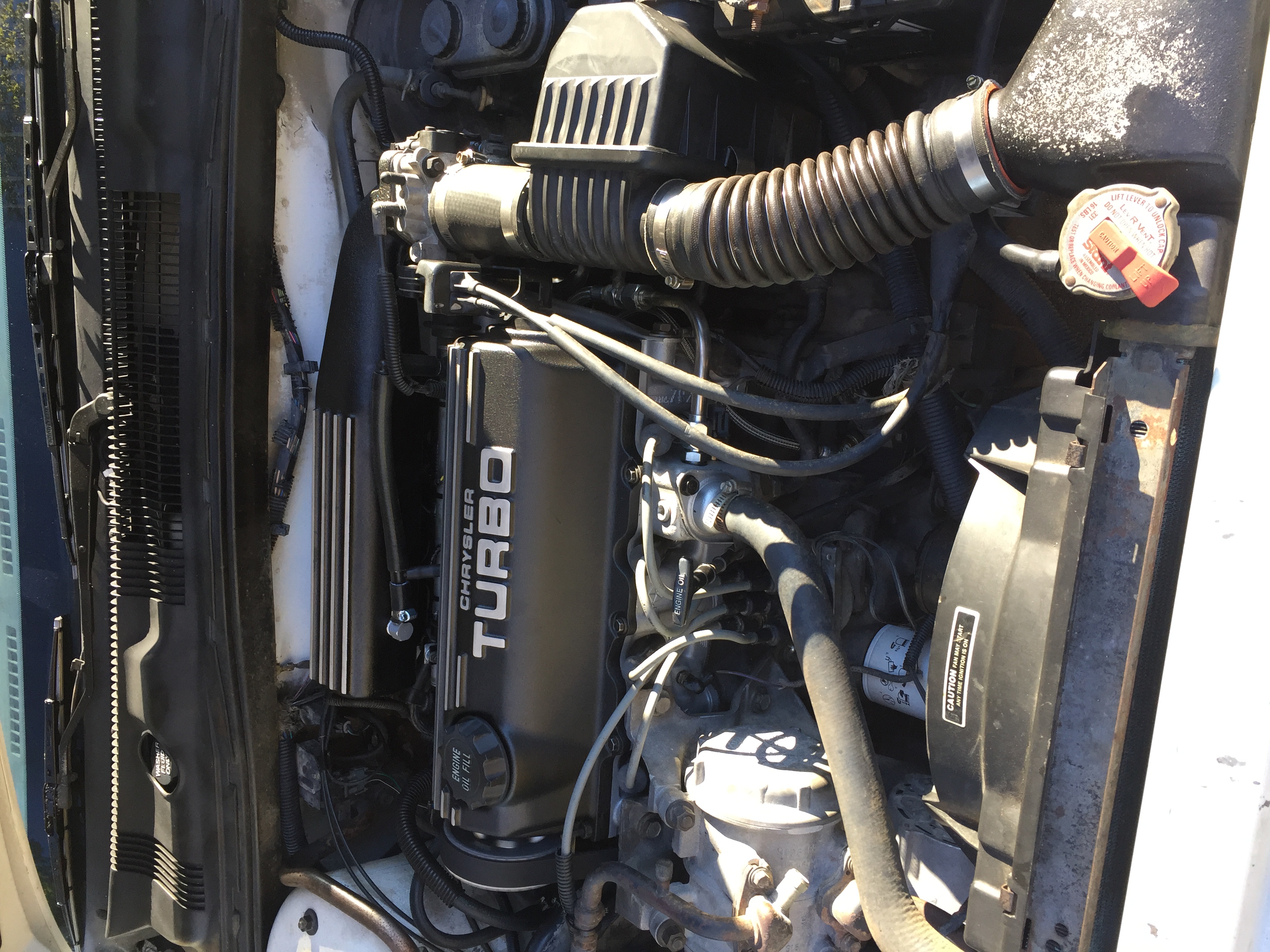 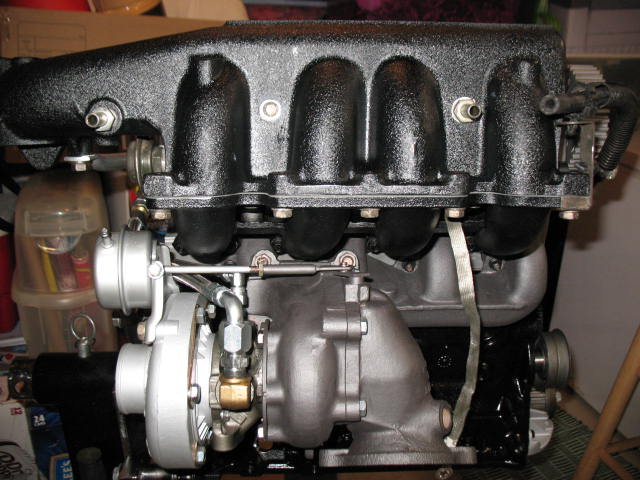 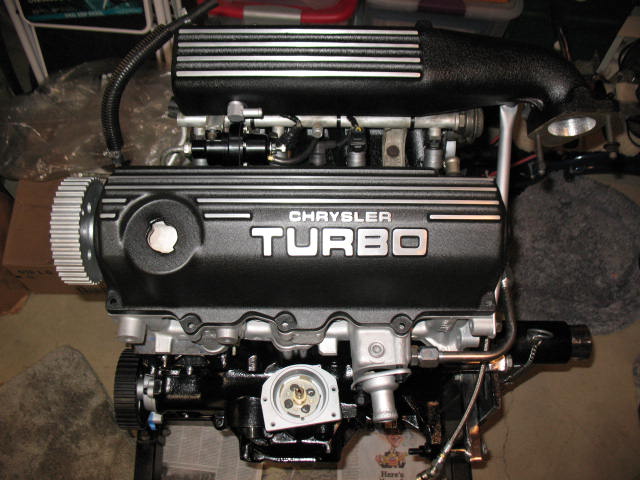 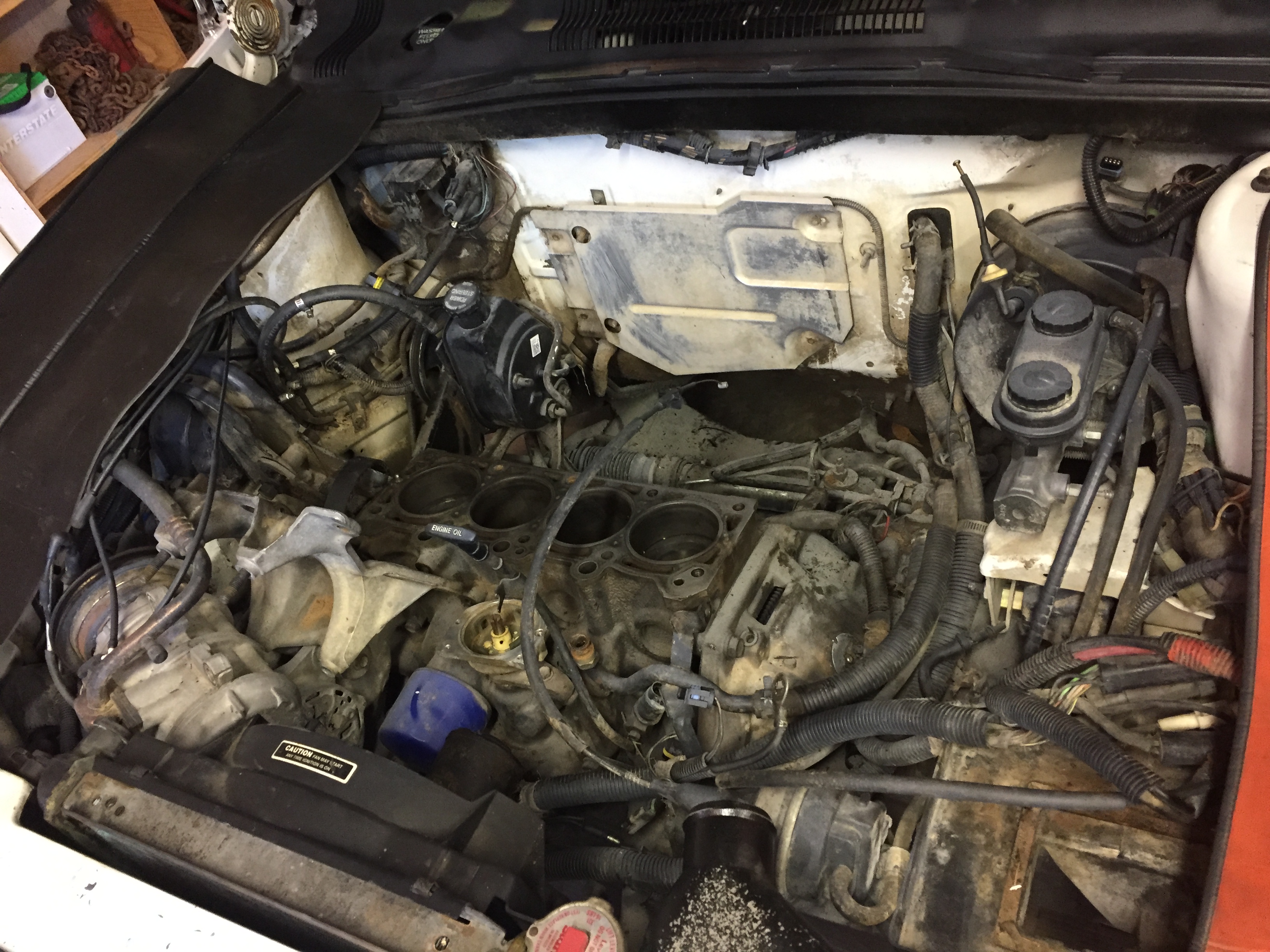 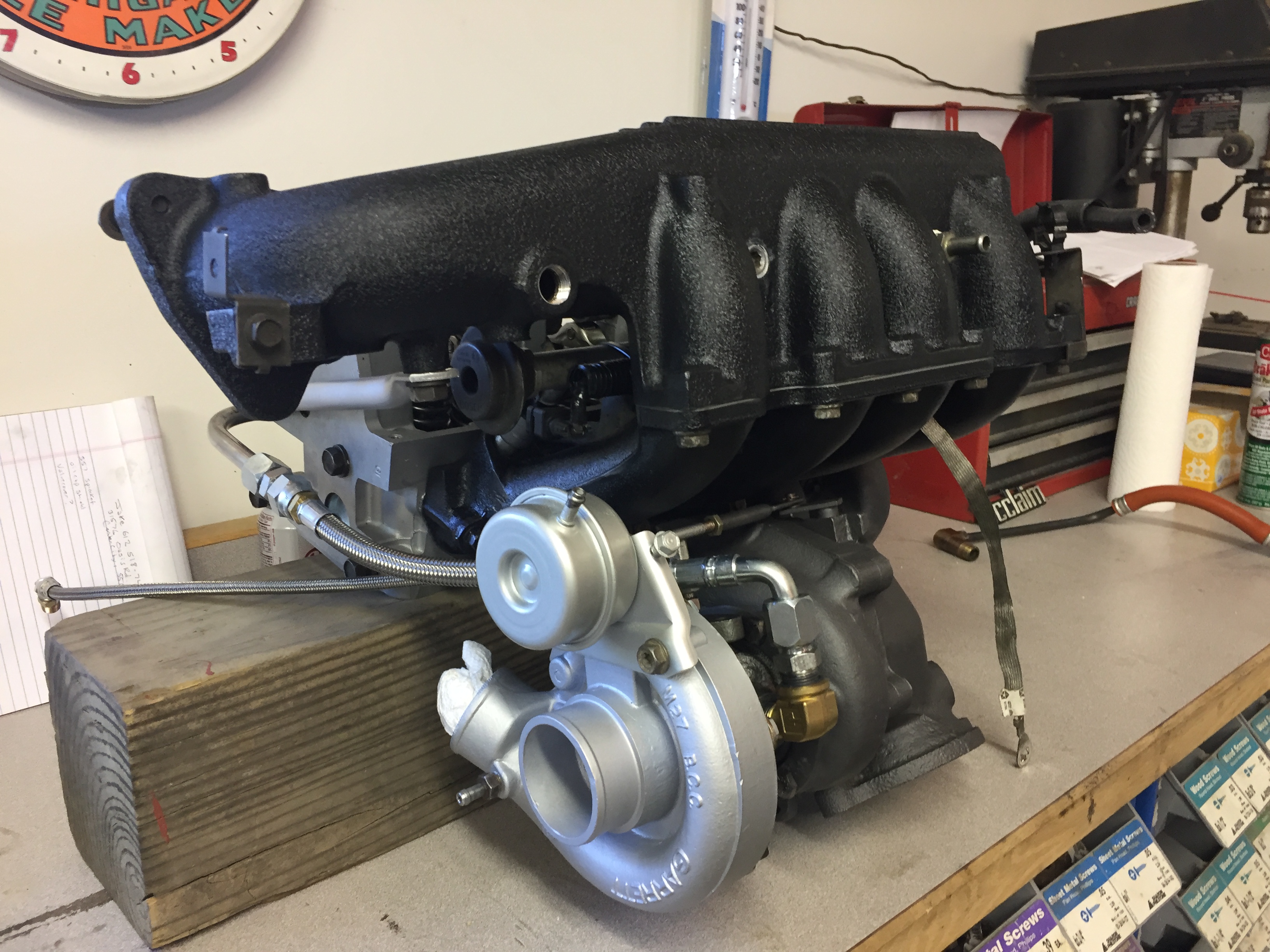 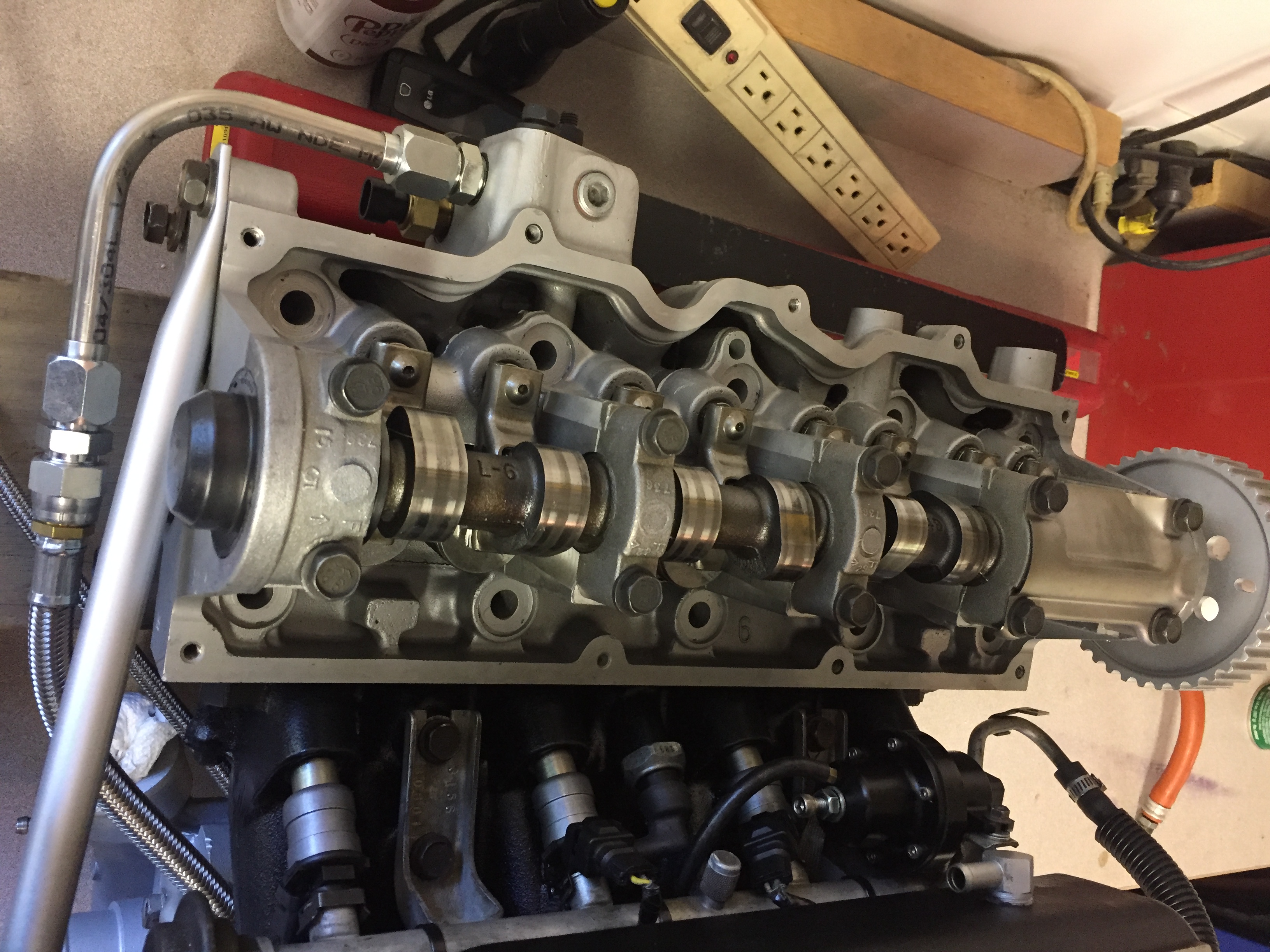 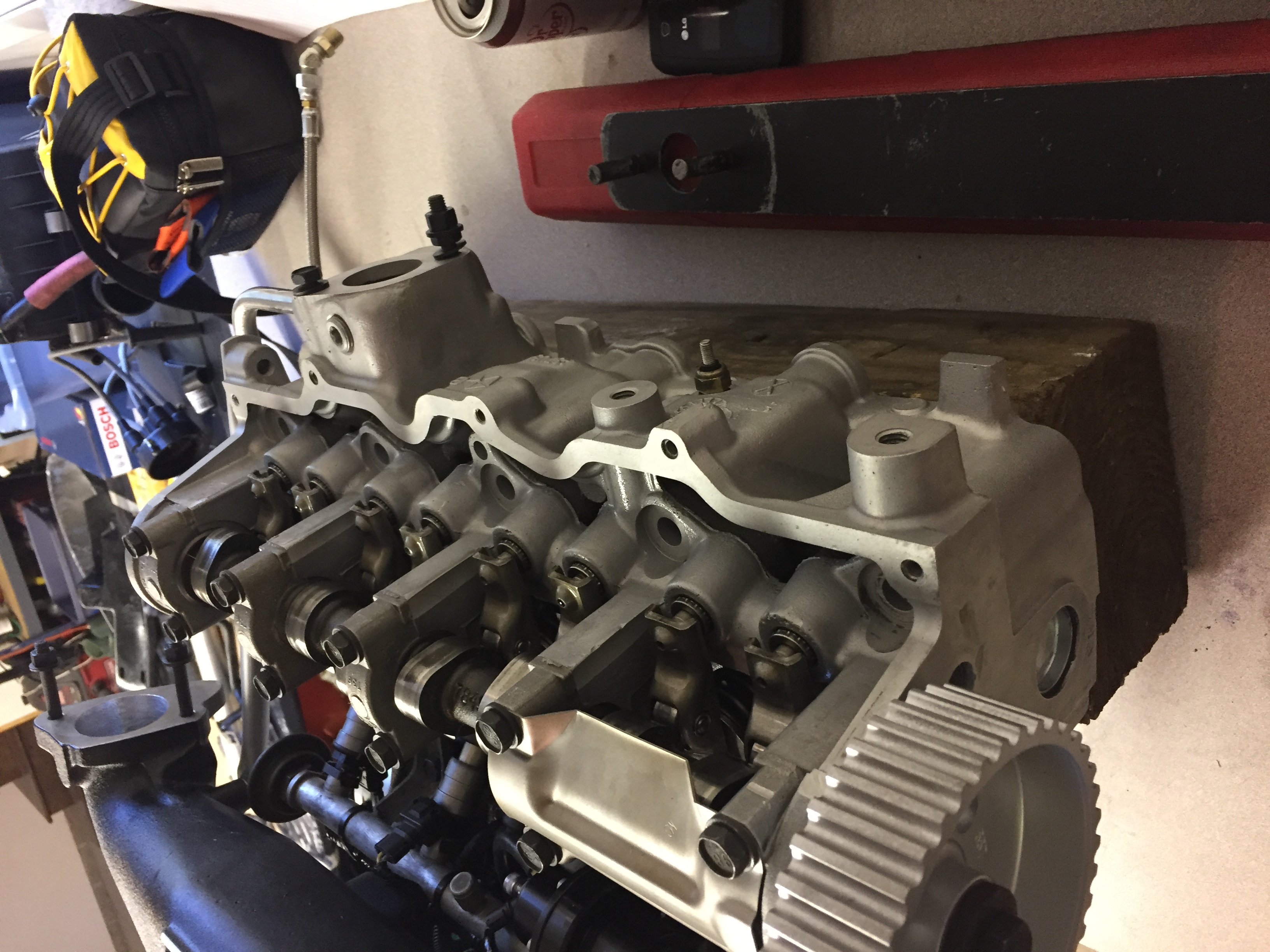 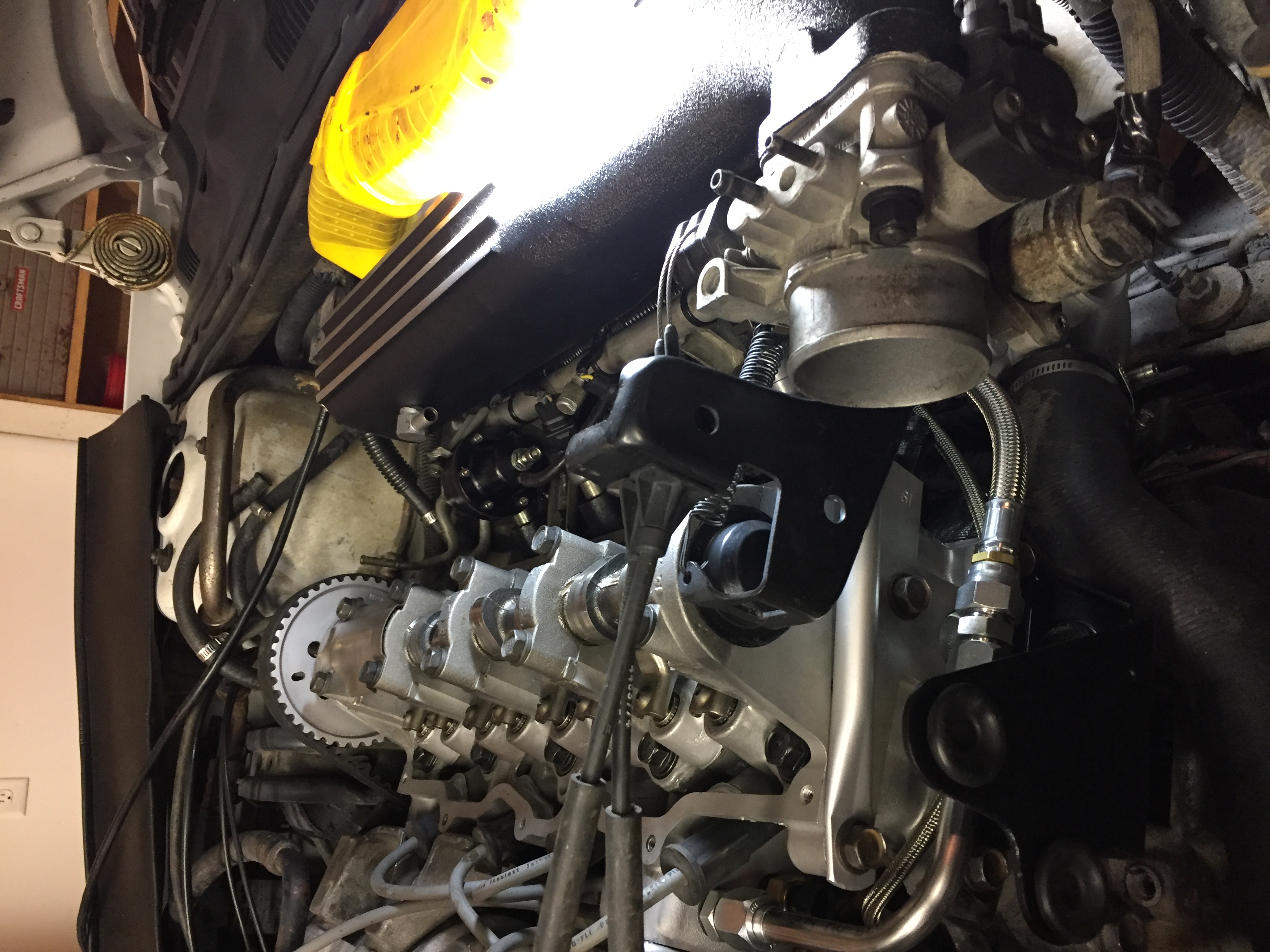 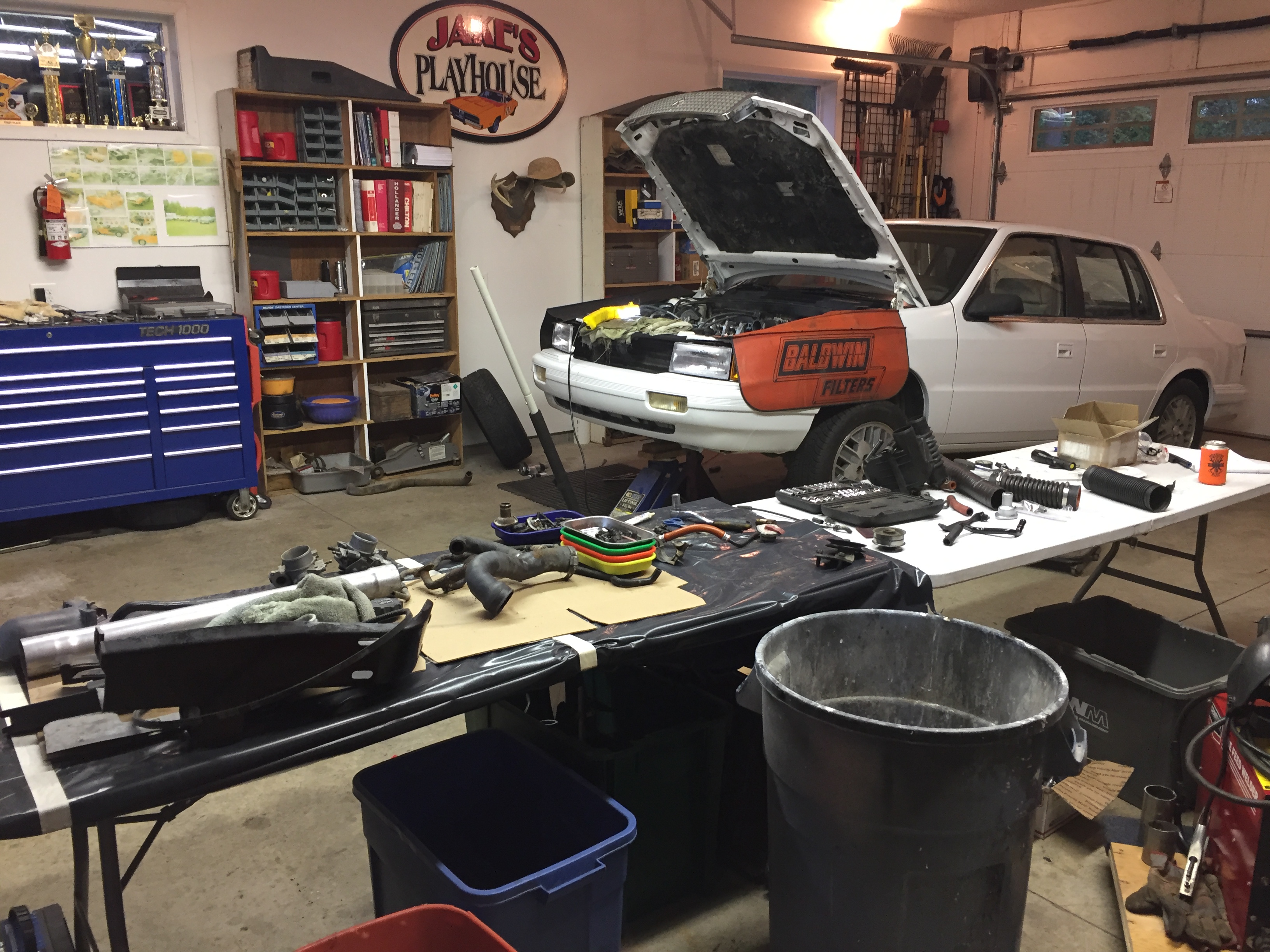 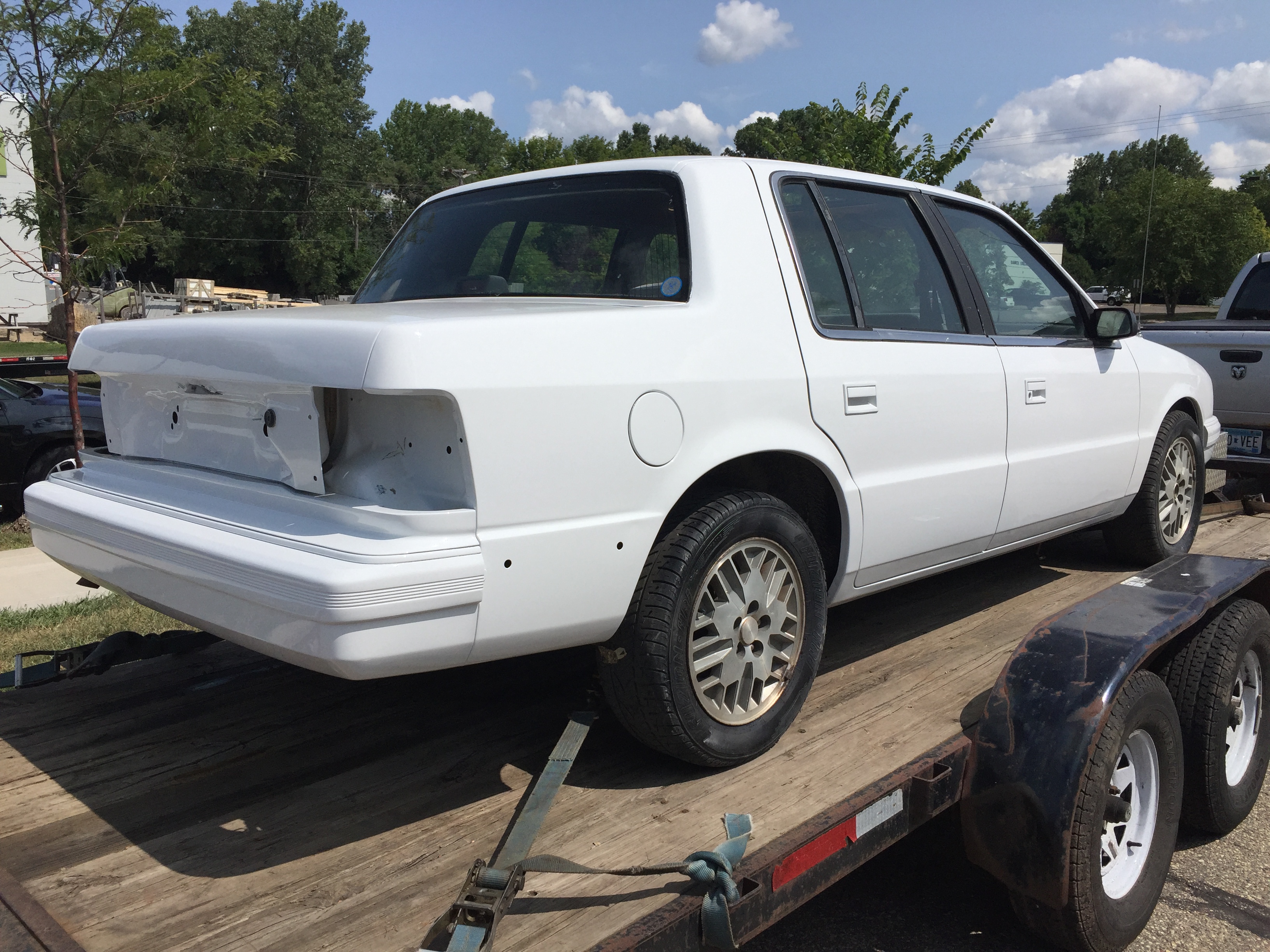 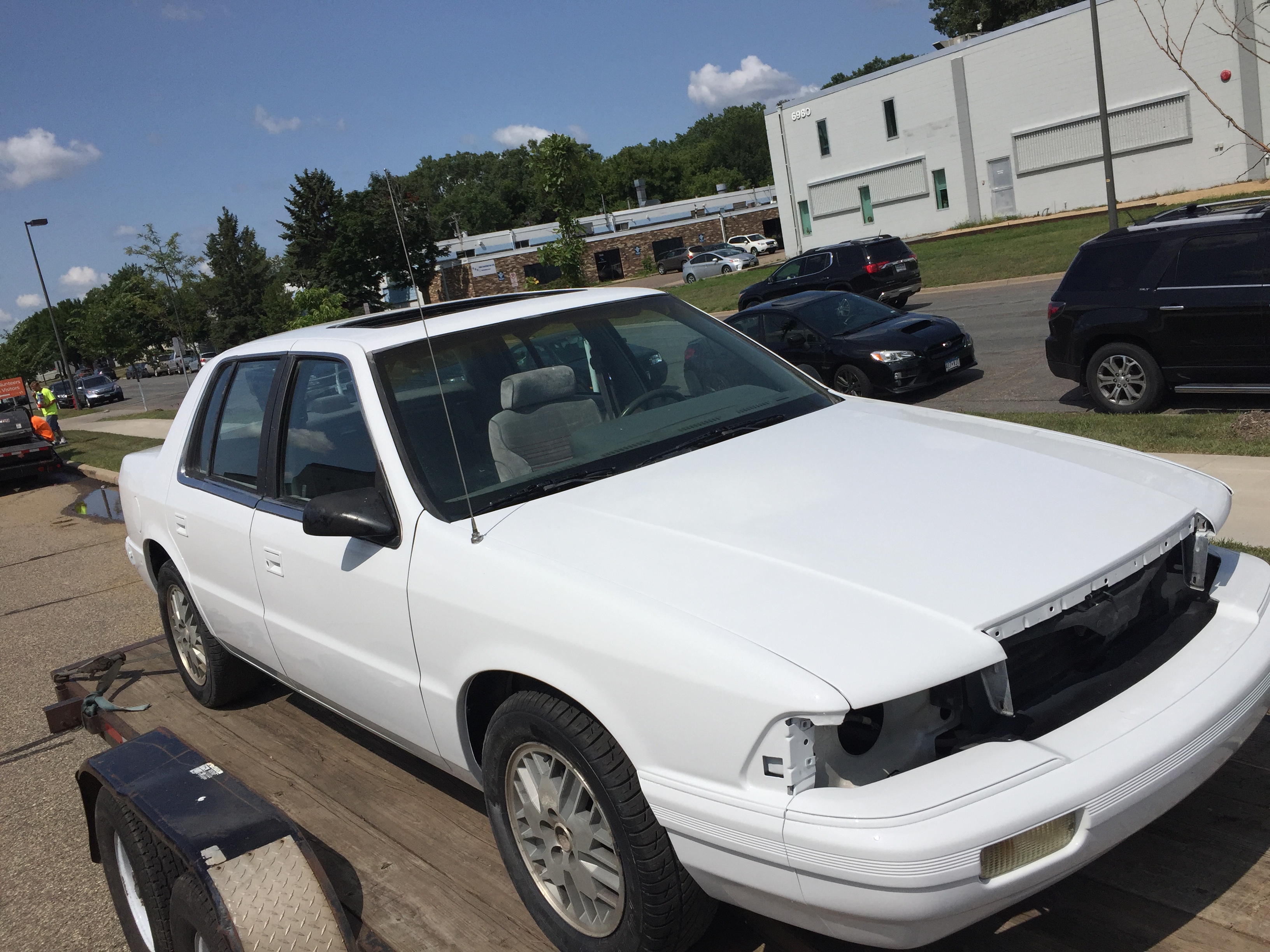 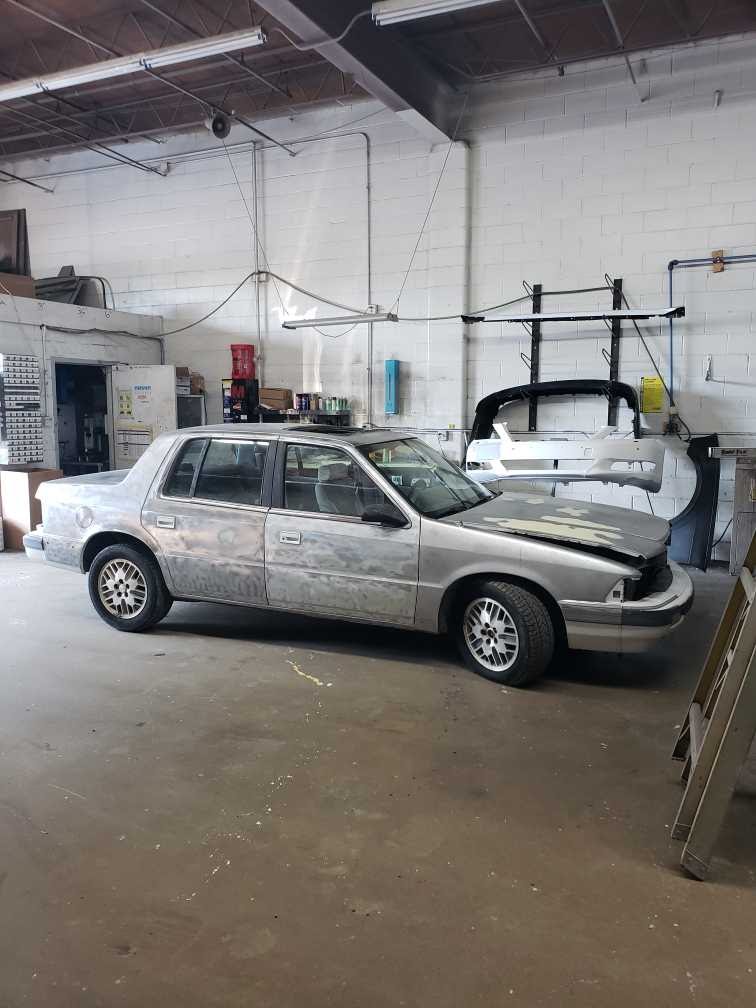 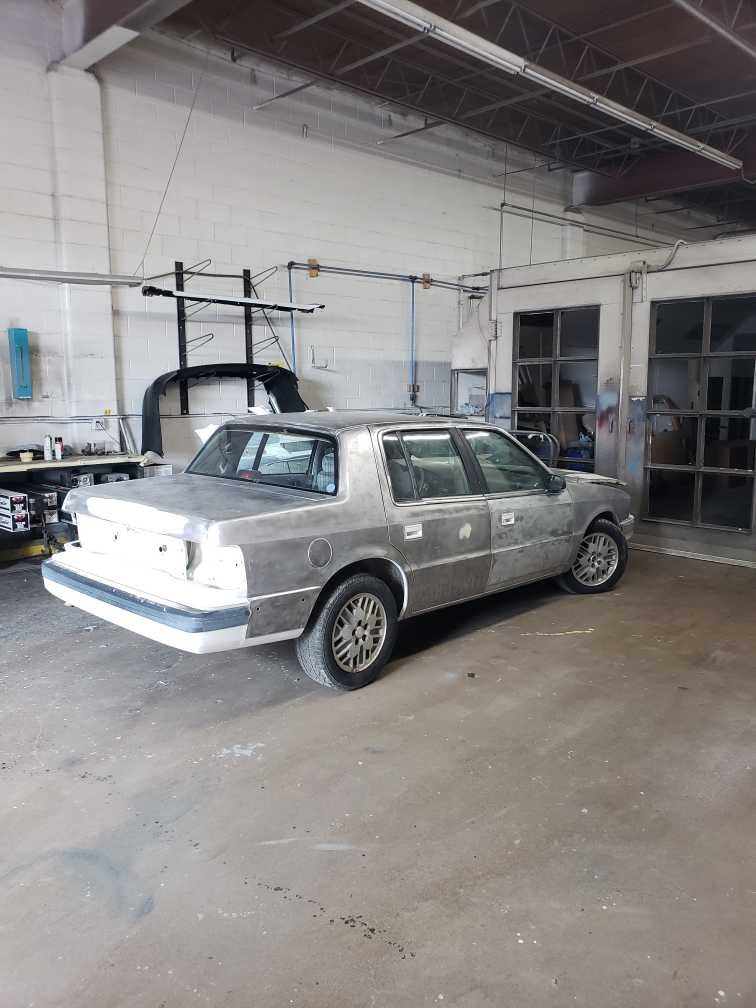 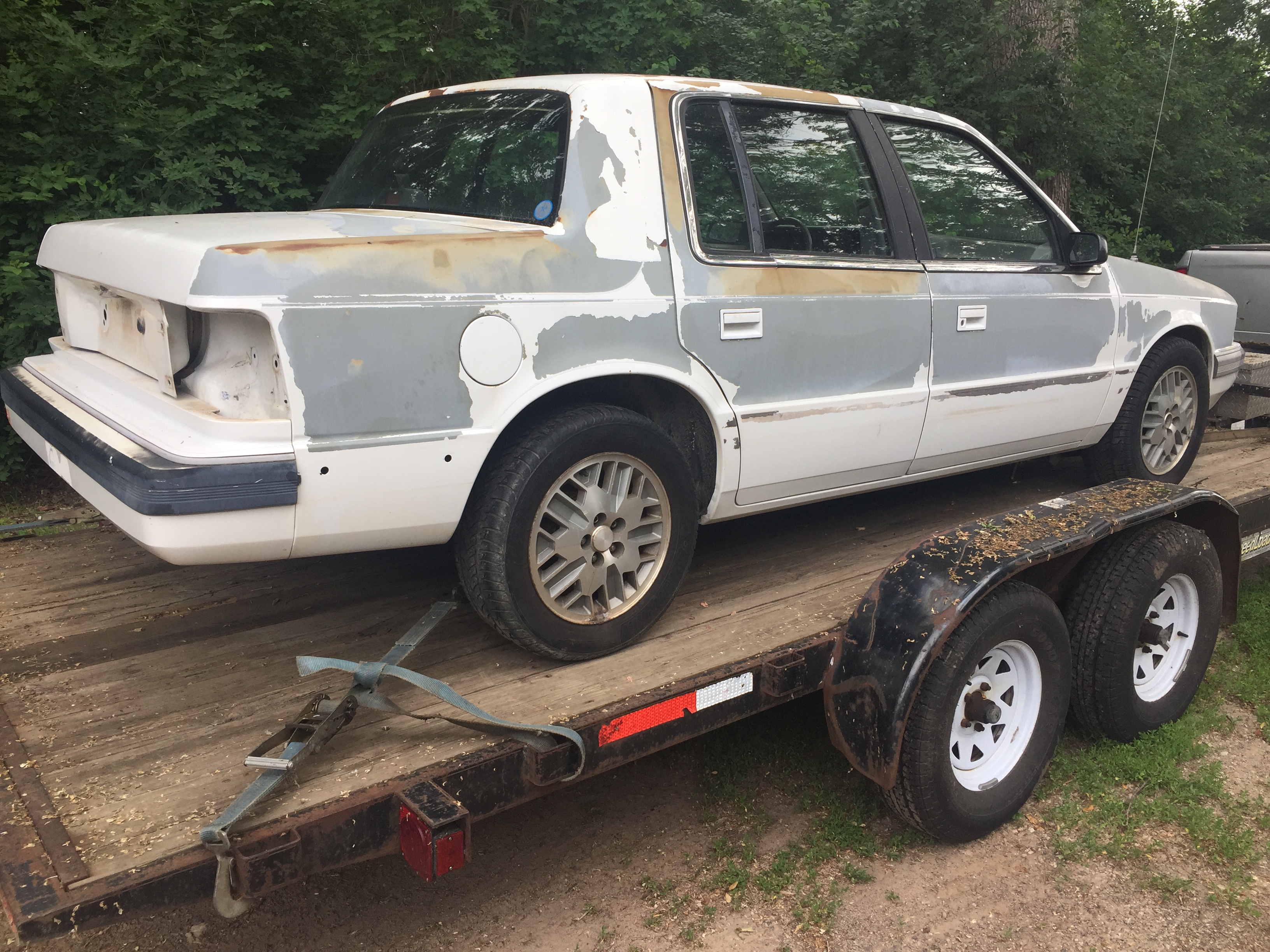 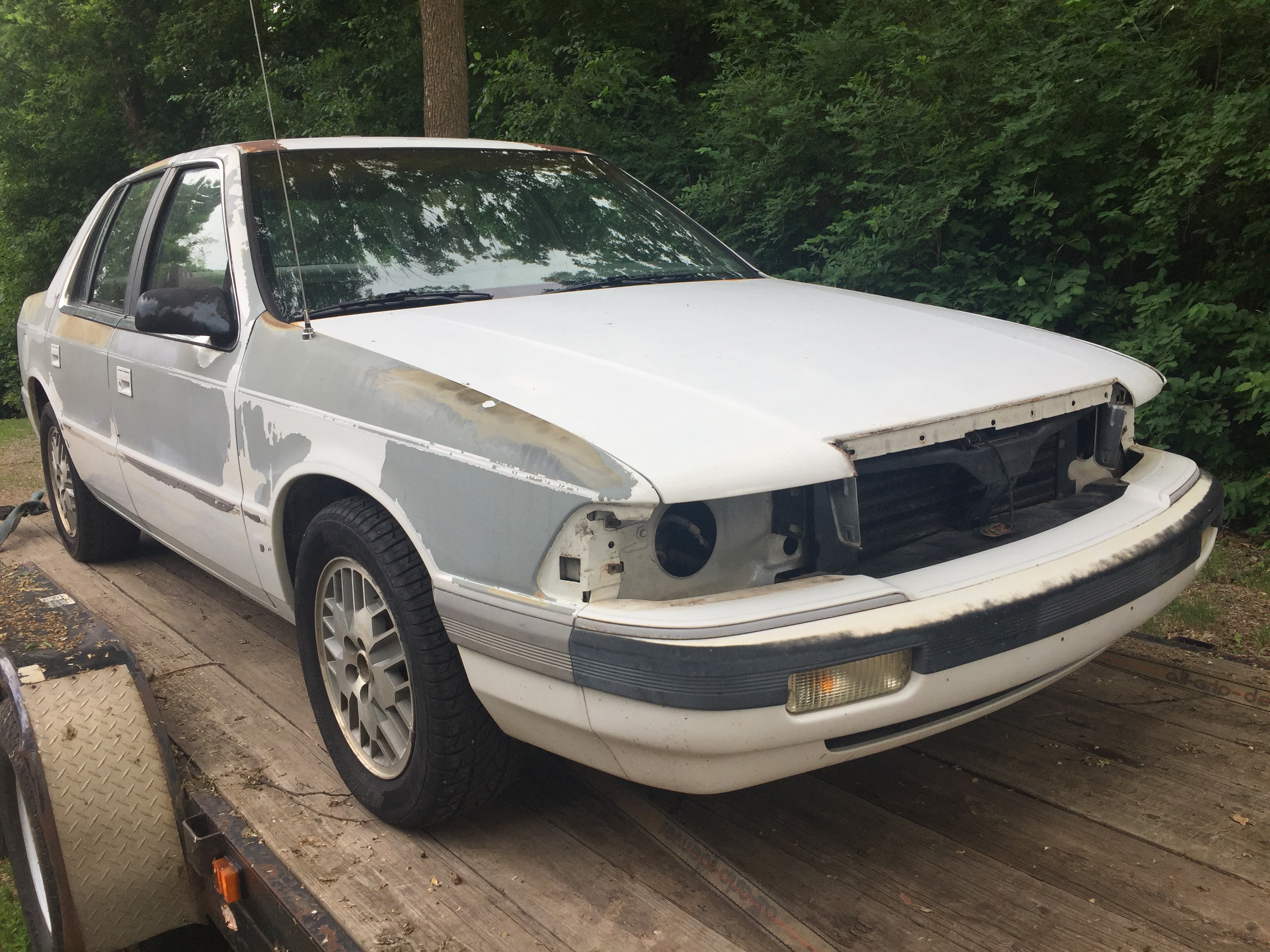 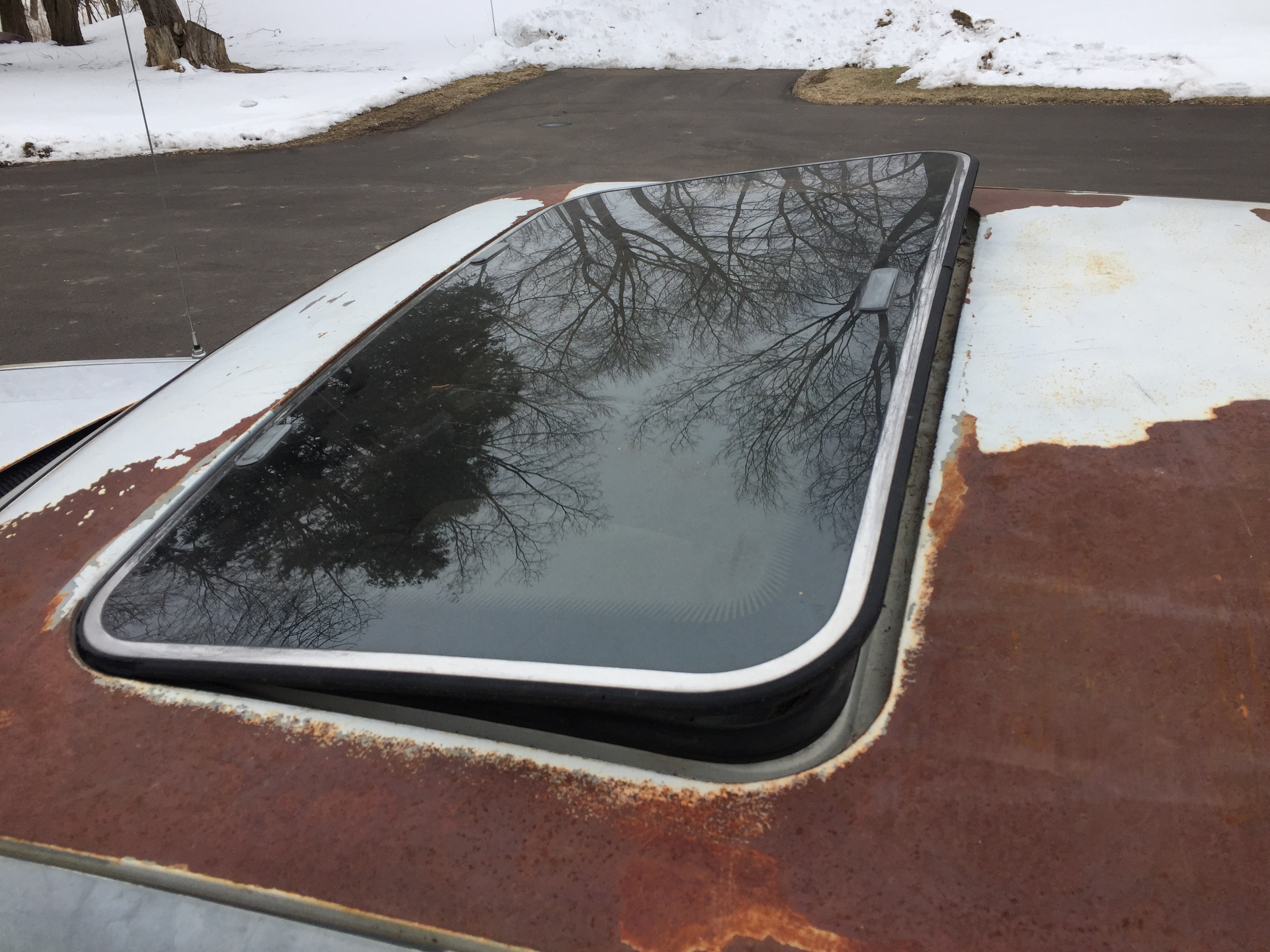 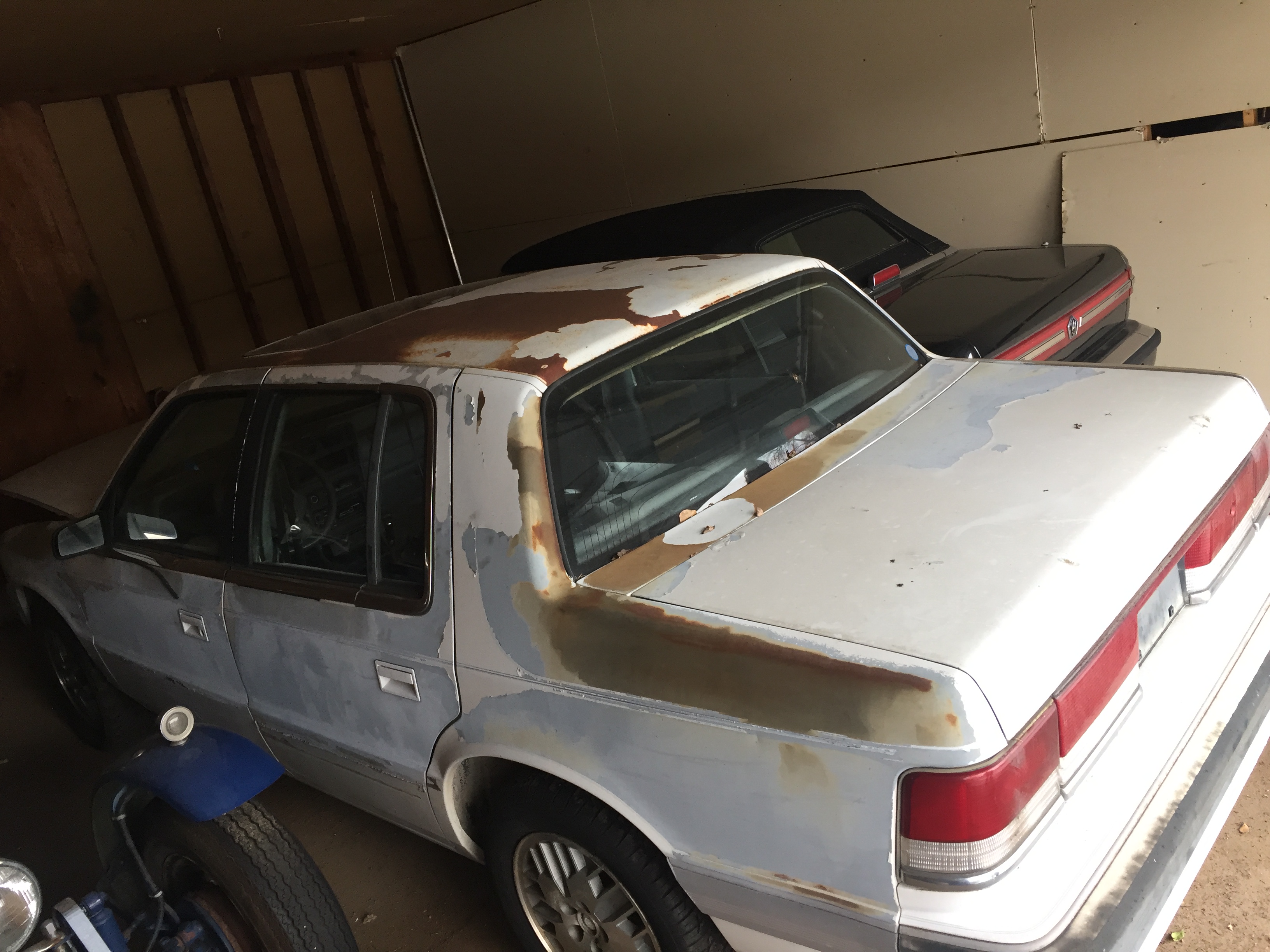 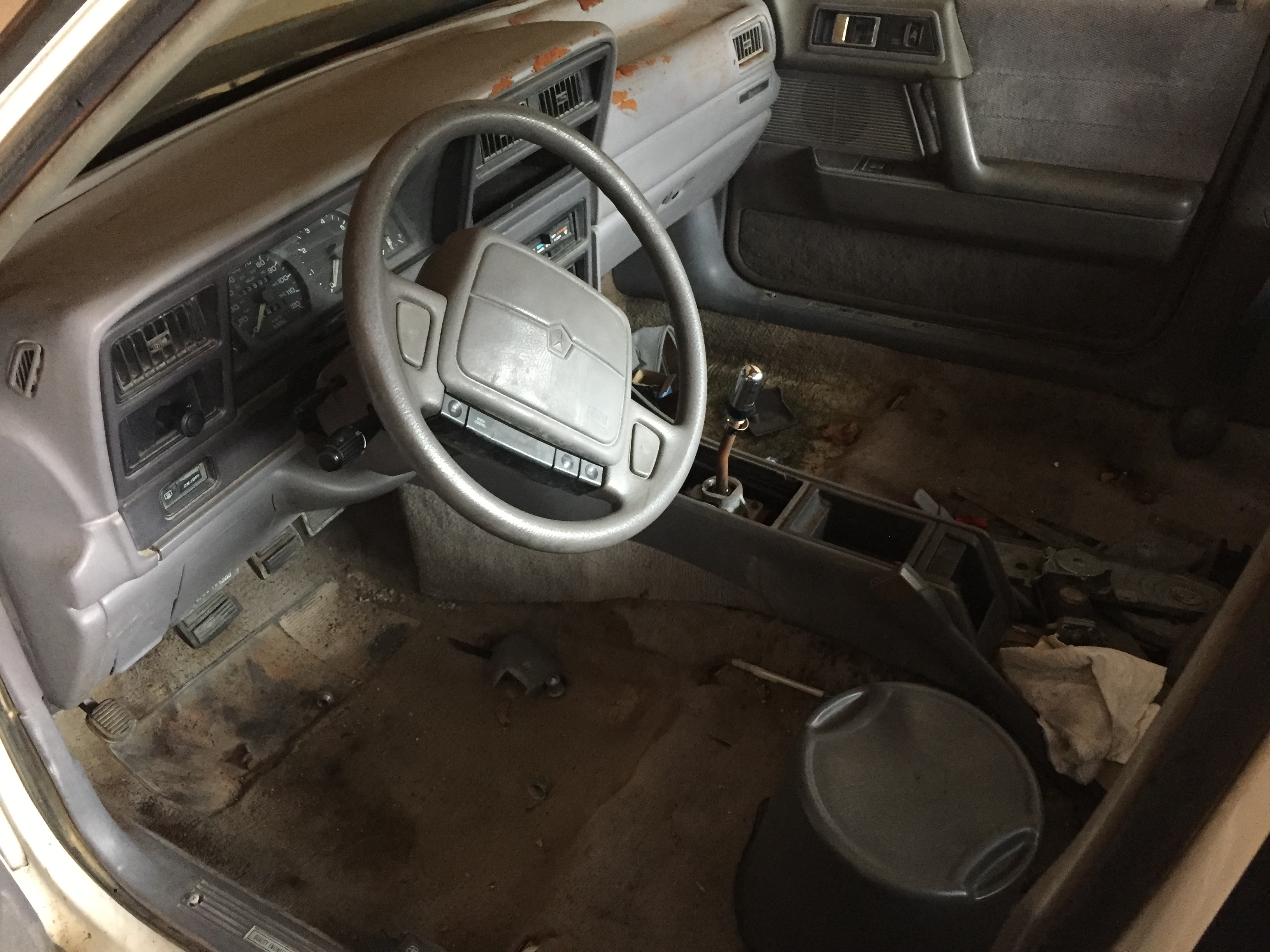 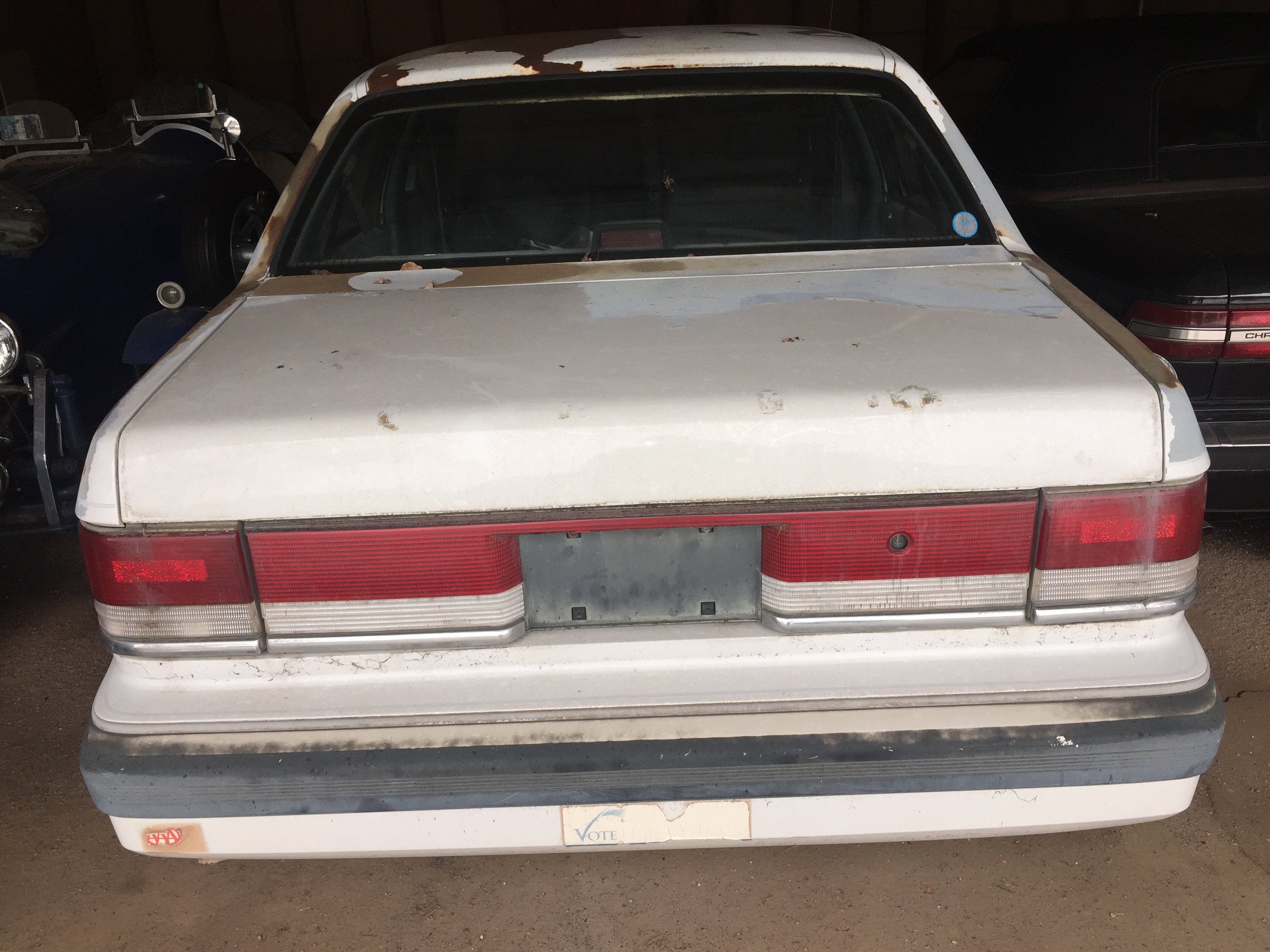 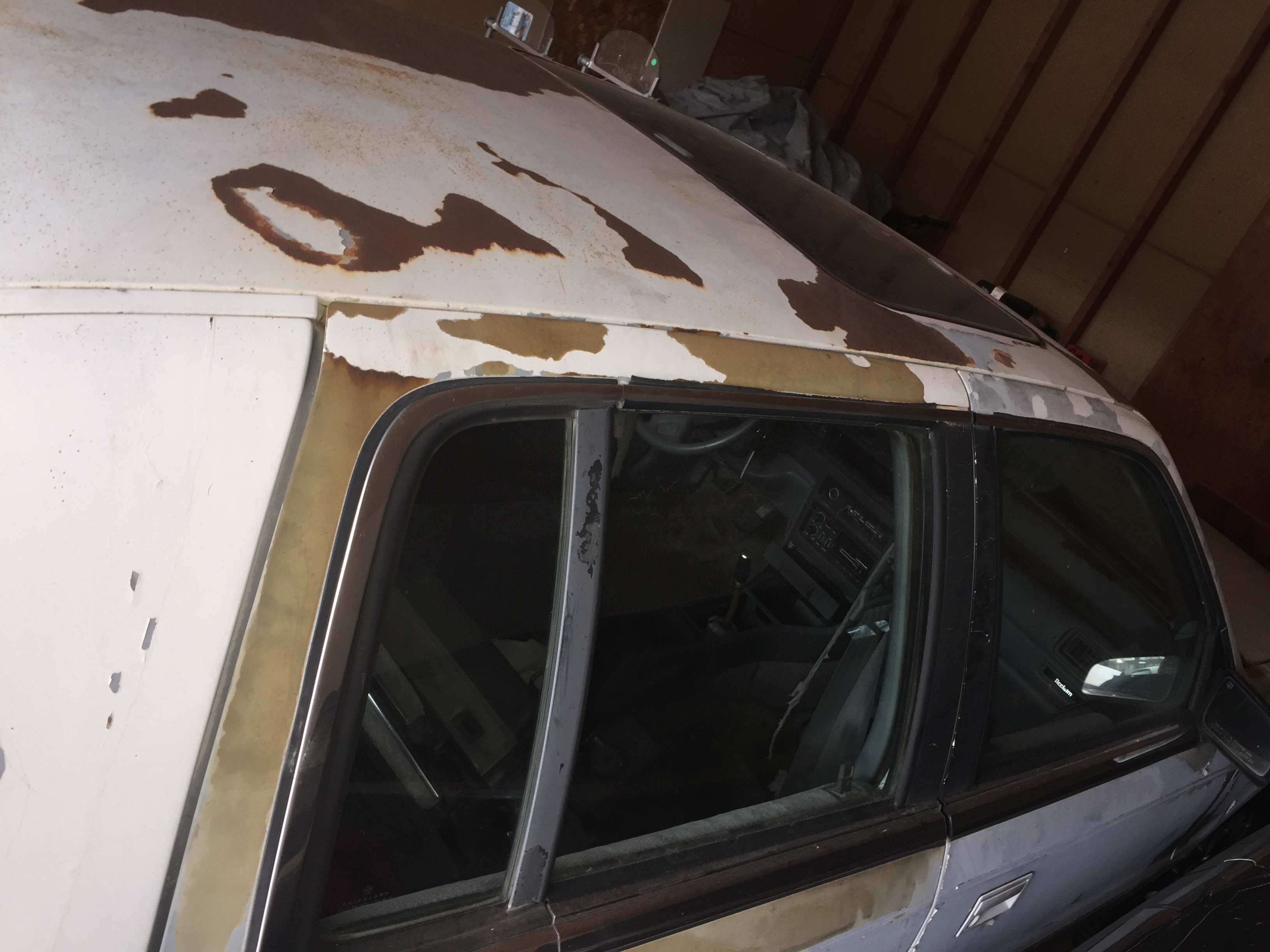