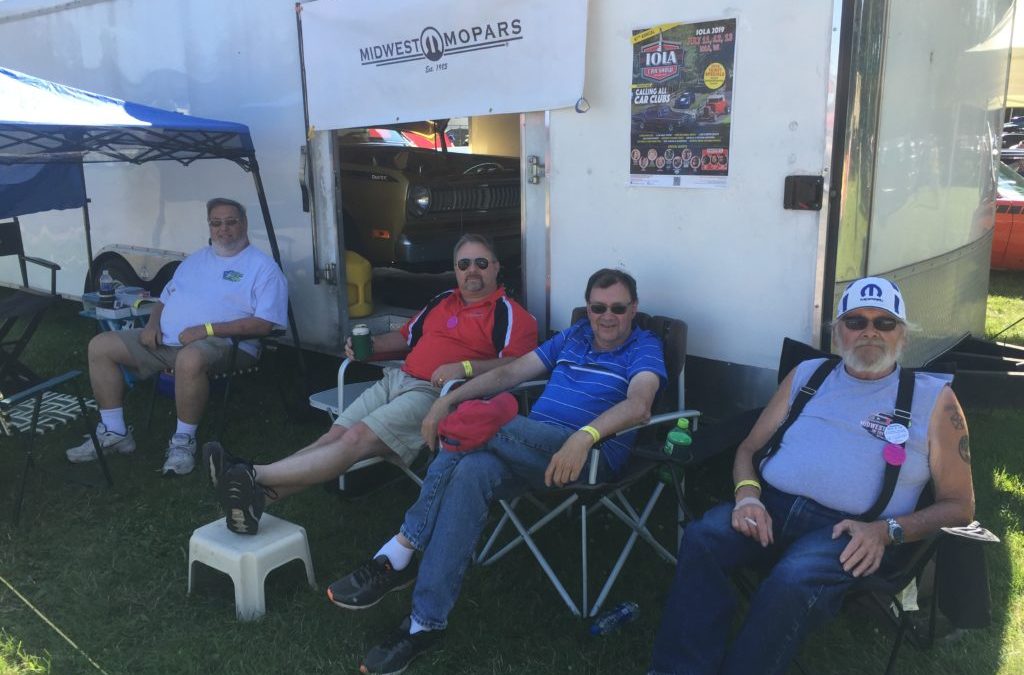 Over a year in the making, a group of members from Midwest Mopars recently attended the Iola Old Car show near Steven’s Point Wisconsin. The club was invited to participate in the Iola Old Car Show’s Calling All Car Clubs theme. Club member Mike  made the trip over to Iola last summer with his ’62 Dodge Dart for the 2019 Program cover photo shoot and dinner.   Mike’s car was displayed indoors and the other club members displayed their cars in the blue ribbon area of the show field with other clubs from around the nation.

Our club display outside served as base camp for attending club members and NEW members. 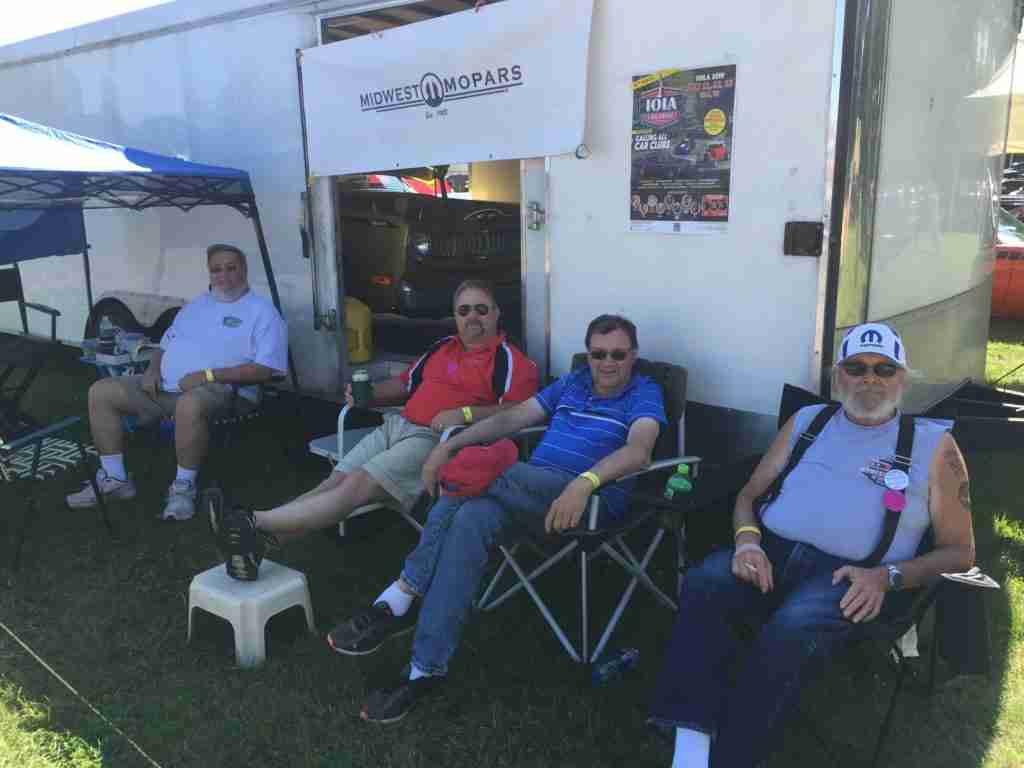 The Iola Old Car Show , located in the dead center of Wisconsin had over 2,200 show cars this year. Link to website here- https://www.iolaoldcarshow.com/

All the major manufacturers are on site.  Automotive celebrities and aftermarket vendors have first class displays. Most impressive is the volunteer army that puts on this major annual event. The food and beverages are 99% sold by local community clubs and organizations. The Lions, the highschool spanish club etc. When you buy the pork chop, steak and or their famous chicken dinners the proceeds are going to the local community.

Here are some pictures from the show. 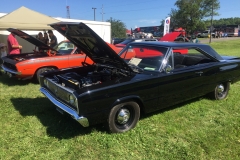 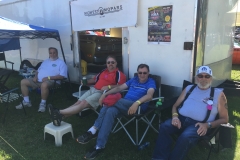 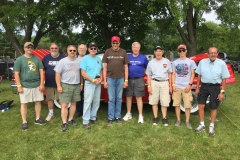 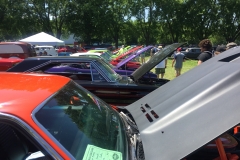 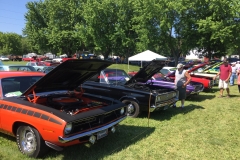 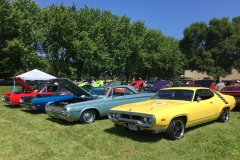 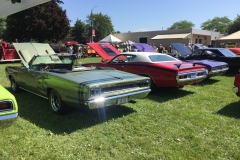 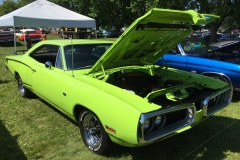 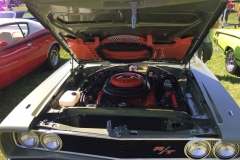 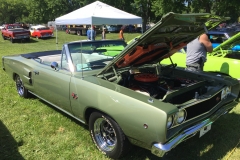 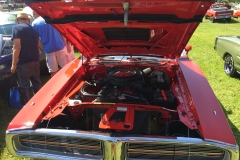 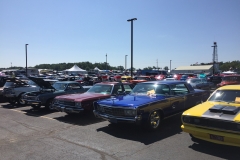 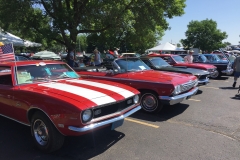 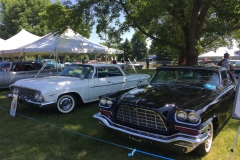 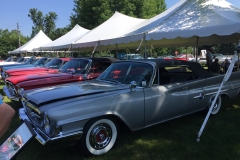 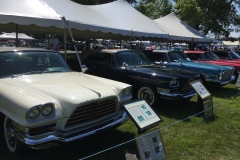 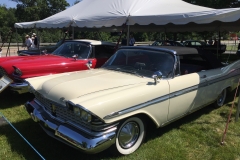 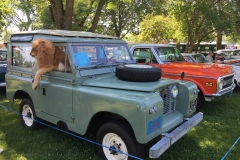 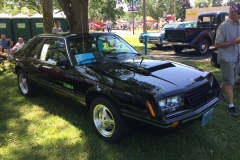 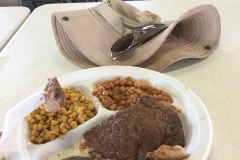 [Show slideshow]
1 2 ►
The over 18 acre swap meet is a challenge to walk in one day. Over 4200 swap spaces. The show also recently added an Amphitheater where live music concerts happen Friday and Saturday evenings.

Iola in July is always hot hot hot!!! For many years in the past I had only swapped parts in the swap meet. I had never taken in the car show itself, nor showed a car. Having the Cuda on display and visiting with the non-stop stream of spectators was a blast. 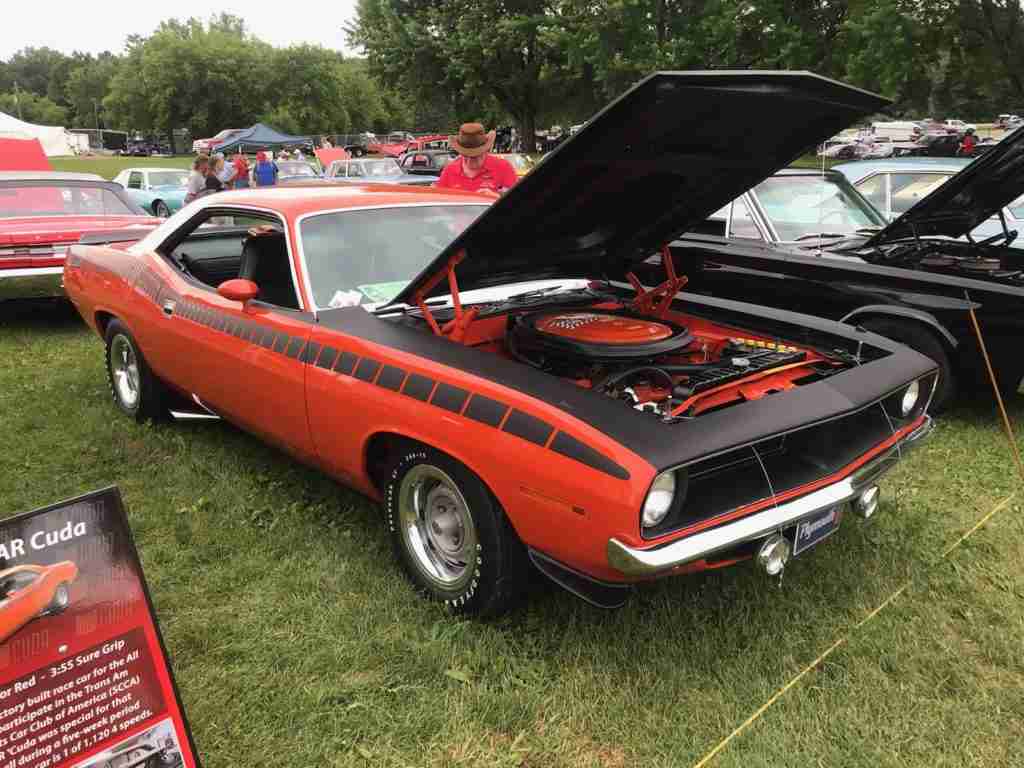 For three nights I decided to camp in the show campground with 500 other campers to be close to the action, and because I am frugal. The nearest hotels are 10-15 miles away. The campground does not offer electric or sewer hook-ups but they did have public showers. The lines were never long and the biffs were always clean and serviced. I slept in my car trailer in a small area in front of the Cuda each night. The pop-up Karaoke party and RC car races along with muscle car grass drags were evidently common campground antics each year. There were two squad cars patrolling the campgrounds every 30 minutes at night. No idiots or issues and my fellow campers were a blast to hang out with.  Many 4th generation Iola show goers were in their glory. 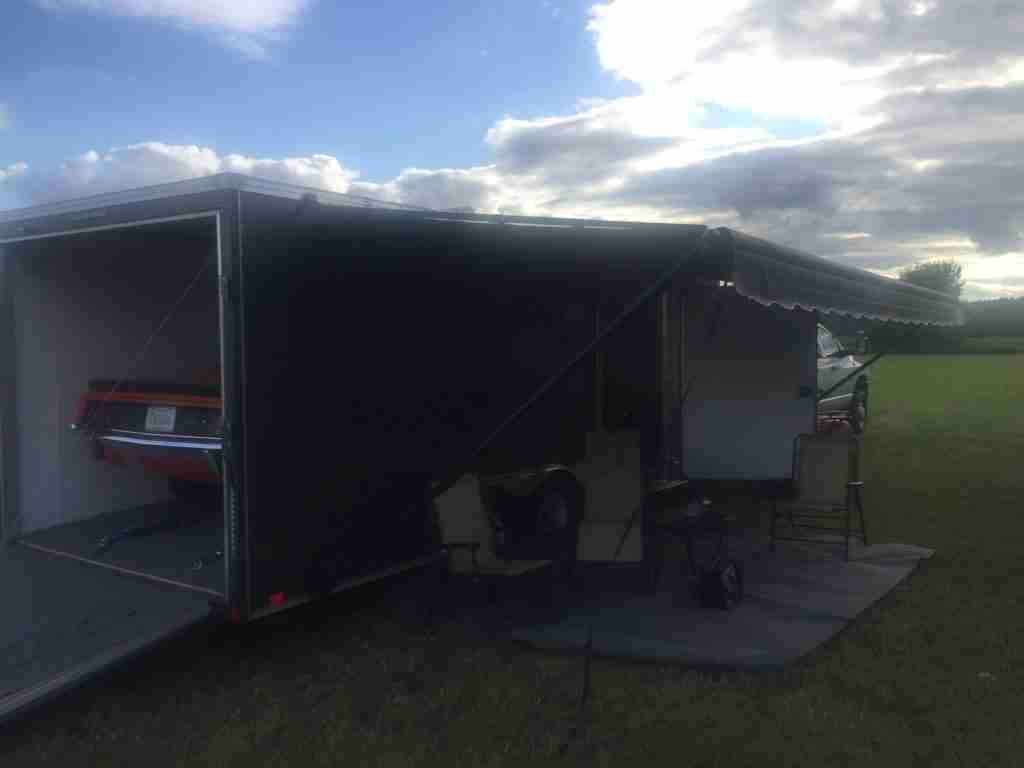 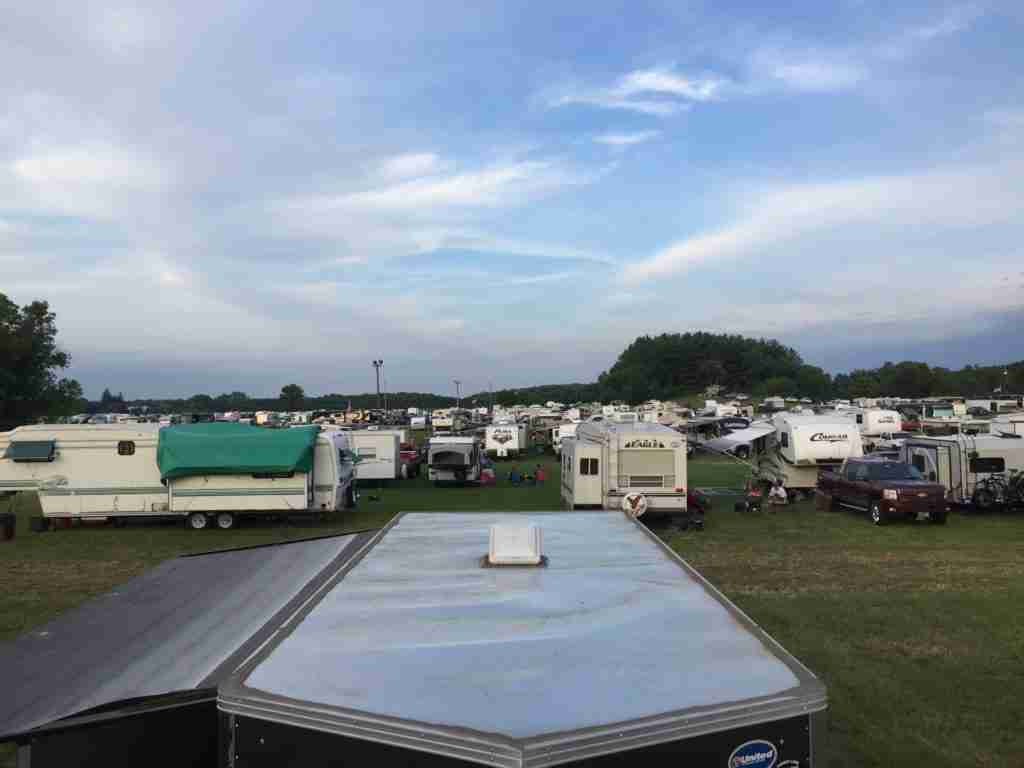 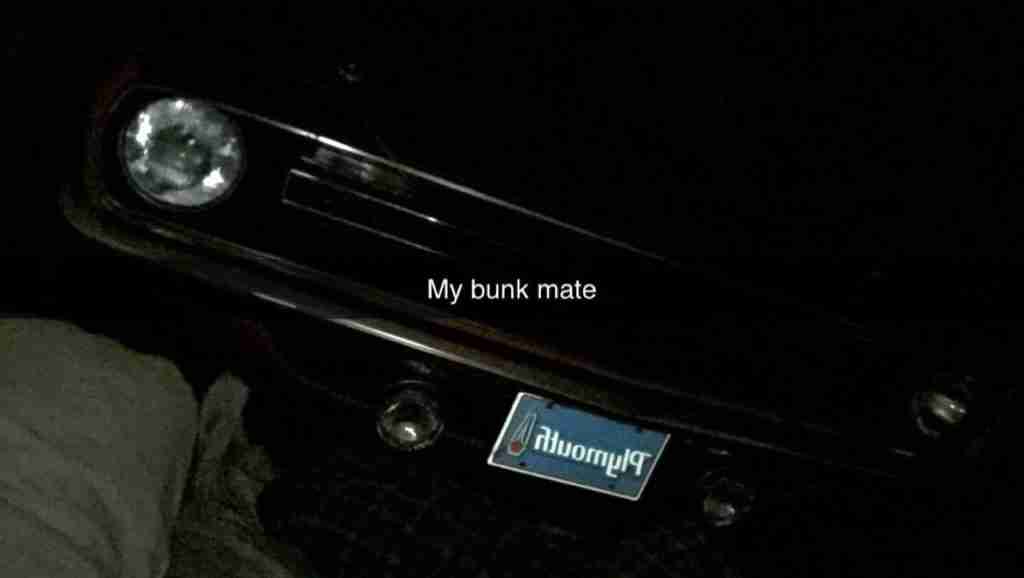 The trip home had bad and good luck. The bad luck, was the big Dodge Ram blew an intercooler hose clamp just outside of Steven’s Point, WI. POOF & POP are never good sounds going down the highway. No power, no turbo, I was broke down hours from home.  Admittedly I was loaded heavy pulling the car trailer, bucking the wind and pouring the coals to the turbo making lots of boost. After a roadside inspection and repair with bailer wire in the 88 degree hot temp with, oppressive humidity, sweating out three days of beer and Cheese Wiz,  I limped the truck into town to a Fleet Farm and performed a parking lot repair with a couple of hose clamps hoping they would hold temporarily. However, the truck’s computer was still in limp mode (prohibits the turbo from working, top speed 30-40MPH. ), and the old trick of disconnecting the battery cables to reset the onboard computer does not work on my truck. The good luck was finding a Dodge dealership in town with a service department open on a late Saturday afternoon who reset the Ram’s computer and got me on my way. Kudos to Dom the mechanic who let me supervise and calmed me down.  They did not have a new correct high-pressure clamp in stock. The fleet-farm hose clamps held for the white-knuckle 4 hour ride home but I was not racing big-rigs up the hills with the heavy load. Slow and easy I made it home before dark.

The Iola Car show is a must see. Well worth the trip to see the variety of cars and treasures in the swap meet. The organizers of this show have been doing it for years and did not forget a thing. There is even a small Pub on site with AC.  The tradition of going to the Iola car show runs deep and strong. THIS is America. THIS is the best of the car culture.  Bring a good pair of walking shoes, lots of water, and high pressure hose clamps. Mopower to ya!. –Jake